Assuming, I guess, that no one in other countries ever takes vacations.

Gale Storm, by the way, was a Texas girl. Born in Bloomington in Victoria County, the  popular singer and actress starred in two television series in the 1950s, making her a contemporary of Lucille Ball.

There's a lot in this short film that seems naive and nostalgic now — the utter lack of passenger safety, for example — but much of the travel advice is still useful to anyone making a road trip, either with or without the family.

At the very least, you'll wish that today's infomercials were this sweet. 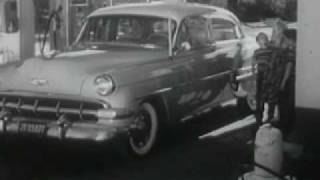 A lot of the advice on trip planning in this 1954 driving safety video is still very useful today. In fact, it sounds very much like the things our instructors talk about in our defensive driving classes.

We've all seen idiots drivers who have no business being behind the wheel of a car. But they don't j[...]

Waiting for the Bus

Because it's Black Friday, here's a bit of black humor. This time, it's a bit of animated fun fro[...]

With Motorcycle Safety Awareness Month drawing to a close, now seems a good time to revisit a wo[...]

What is the difference between "defensive driving" vs "driving safety"? is a common question from o[...]

Motorcycle Safety for Riders and Drivers During the 1970s, I was in high school and I had a few[...]

by Gene McGuire Have you ever been running late on your commute to work and suddenly the red tail[...]
×

Dive straight into the feedback!Login below and you can start commenting using your own user instantly