… a failure to properly secure a load.

UPDATE: The YouTube account that hosted the video that was posted here originally no longer exists. In place of that video, we have instead this intersection camera clip of a truck that has its cab crushed by it own unsecured load of timber when the truck stops for a red light and the logs slide forward into the cab. 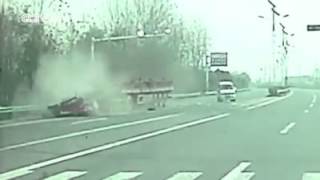 Video of a truck destroyed by its own unsecured load as it slides forward and crushes the cab of the truck.

Most drivers won't be faced with the dangers of a load of timber, but we all face road hazards from all kinds of unsecured loads everytime we drive. Anything that isn't properly secured onto a vehicle or in a truck bed can become a flying hazard when wind carries it into traffic.

And as in any kind of collision, physics is against you here. According to the U.S. Department of Transportation, at 55 mph a 20-pound object that falls from a vehicle has the impact strike of half a ton.

We updated this post because our original video became unavailable, but it also gave us the opportunity to talk about a really common and very dangerous driving safety hazard.

And it draws attention to the Texas-wide campaign Secure Your Load, that wants to inform drivers about the hazards of unsecured loads on their own vehicles and of following too closely behind vehicles that haven't been loaded properly.

Posted in Driving and Safety
← Online Defensive Driving for your Android PhoneIs a Texas Traffic Ticket a Criminal Offense? →

by Gene McGuire Have you ever been running late on your commute to work and suddenly the red tail[...]

Over the River and Through the Woods The Challenges of Winter Driving by Gene McGuire  [...]

What to Do After a Crash

“I’m an Excellent Driver” What to do if you are in an auto collision by Gene McGuire Althou[...]

Dogs in Hot Cars Protecting your Best Friend from the Worst Heat It's all about dogs this time[...]

There is a misconception that it is more dangerous driving in cities than in the country. While en[...]

March MADDness: Talking to Your Kids about Drinking and Driving

Spring. The season of growth and newness, of apple blossoms and gentle breezes, fragrances, birds[...]