When the gods of music and comedy merge, Christopher Guest becomes their mavin. This performer gave us Nigel Tufnel of Spinal Tap, the greatest ‘mocumentary' about a heavy metal band.  He was the guitarist who had amps that go to ‘eleven' and had guitars with infinite sustain.

This Rob Reiner-directed film is considered one of the best comedies ever made. Christopher turned this one time gig into a career with the fictional band that has included sequels and recordings.

Lately, Christopher has been working with the same ensemble in a number of improvisational films such as Best in Show, A Mighty Wind and For Your Consideration.

Fun Fact:  Christopher Guest is also The Lord Haden-Guest AKA Baron Guest.  He holds a British Peerage with The House of Lords.  That means is wife Jamie Lee Curtis is Baroness Guest.  It is not often one sees a topless Baroness in the movie Trading Places.

Christopher Guest writes and plays hilarious characters, but he is famously normal in his every day life.

And reportedly very hard to interview, but we'll let you decide for yourself after seeing this. 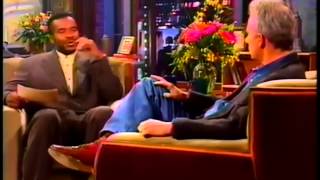 Crocodile Hunter Steve Irwin was most well-known for being a wildlife expert and television personal[...]

Davie Brenner was a favorite comic when Johnny Carson ruled the television airwaves. This master of [...]

Shelley Berman There are names that get lost in the bane of history, people who were successful in [...]

Tommy Smothers is half of one of greatest comedy duo's of all time--The Smothers Brothers.  They wou[...]

Pauly Shore is having a birthday

Pauly "The Weasel" Shore was destined to become a comic.  His mother owned a famous comedy club in L[...]

Happy Birthday to a TV Legend

Ernie Kovaks once said, "Television:  A Medium.  So called because it's neither rare n[...]