Unusual footage of a Taiwan bus driving out of control and crashing into cars, shot from multiple angles by the bus's own cameras.

Before you click the play button, you should know that this video is violent enough for YouTube has but an age-restriction on it for violence. 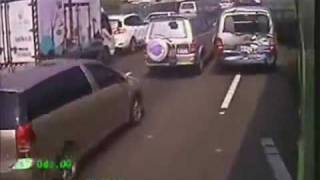 Violent video of a bus out of control and crashing into traffic, shot by the bus's own cameras

Remember this: the vehicles that are so heavy that they are hard to get moving are also hard to stop quickly. When pulling in front of a city bus or a large semi truck-and-trailer, give them sufficient following distance between them and your rear bumper.

In our Texas driving safety classes and online course, we talk about keeping a safety space around your car. This is a basic defensive driving technique that includes a safe following distance and keeping empty space beside you in adjoining lanes whenever possible. Such a safety space and paying close attention to traffic around them might have saved some of these drivers from so much damage, even from an out-of-control bus.

Posted in Driving and Safety, Real Stories of Real Drivers
← Oh, I wish…Chitty-Chitty-Bang-Bang For Sale →

by Gene McGuire Have you ever been running late on your commute to work and suddenly the red tail[...]

Over the River and Through the Woods The Challenges of Winter Driving by Gene McGuire  [...]

What to Do After a Crash

“I’m an Excellent Driver” What to do if you are in an auto collision by Gene McGuire Althou[...]

Dogs in Hot Cars Protecting your Best Friend from the Worst Heat It's all about dogs this time[...]

There is a misconception that it is more dangerous driving in cities than in the country. While en[...]

March MADDness: Talking to Your Kids about Drinking and Driving

Spring. The season of growth and newness, of apple blossoms and gentle breezes, fragrances, birds[...]
×

Dive straight into the feedback!Login below and you can start commenting using your own user instantly