As usual, don't try this at home.

(And if you are trying this at home, invite me over.) 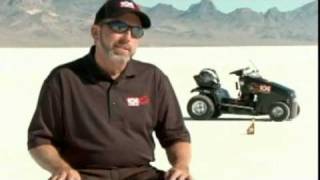 Bobby Cleveland sets a new world record when he gets his lawnmower up to 96 mph.

The sad thing is that this guy spends so much time
racing that his lawn looks like crap.

Bobby Cleveland had previously set a world record in 2006, with a speed of almost 81 mph. His record was then beat by Don Wales at 87.833. But with this record Cleveland again has the fastest speed on a lawn mower.

Of course, it slows him down if he has to stop and empty the bag attachment.

Posted in Entertainment, For Car Lovers, Real Stories of Real Drivers and tagged inventions
← Sometimes, It Takes a Village to Move a CarTop Gear Tests the Toyota Hilux →

The Cars of the Future

Just a bit of fun today... For those of you who like to see how people in the past envisioned t[...]

Somebody Pickup a Guitar...

Here's something we spotted on Reddit. The poster, SCPulse, added the caption "Car drove thro[...]

In Tobleronistan, the morning commute is not very stressful.   We found this photo o[...]